As you know, Joss and I have been tirelessly working on renovating our Sprite Major caravan and it’s finally finished! We took it out on its first outing over the weekend and we were thrilled with the result.

After months of hard work, our caravan was finally finished and took to the festival fields over the weekend at Latitude Festival. We also decided on a name, Sully! We thought Sully the Sprite Major had a nice ring to it.

Where we left off…

As you will have read in Part 1, Sully has been replumbed, rewired, regassed, had a paint job and a very thorough clean but there was still a lot to do and Latitude Festival was fast approaching! 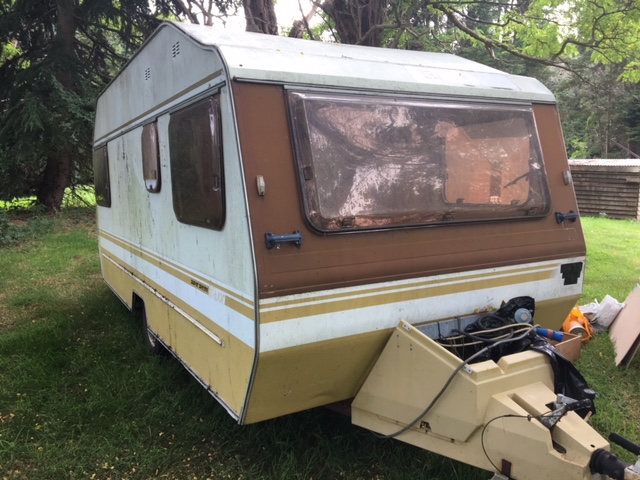 Flooring was something which we thought long and hard about and we took a while to choose what we thought would be best. In the end, we went for a vinyl flooring which looked like an oak wood floor to give an authentic and rustic feel yet be practical and cheap! We got the flooring from UK Flooring Direct and it was cheap as chips! You buy it in certain widths and select the length you need. We ordered slightly more than we knew we needed just in case we needed to add more at a later date or it got damaged; it’s always good to have some spare! We used vinyl flooring tape and spray flooring adhesive to stick the vinyl to the floor of the caravan and cut it to size with a standard box cutter.

Don’t worry if you get a few bumps, air bubbles are little devils but are easy to squeeze out. Just use a piece of wood or even your palms to push the air bubble to an edge, but make sure to keep the flooring tort when applying the adhesive to stick it down. 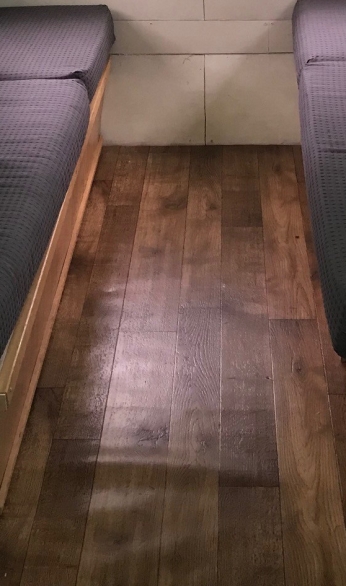 So I need to admit that we had some help with this bit. Both Joss and I have full-time jobs meaning we were both very tight for time so we decided to employ a family friend to help us rebuild and construct the benches. We knew we wanted them to be the same as they were originally and be able to fold down into a bed. Using only plywood, some butt hinges and a few wood batons we made the benches into functional seats which also folded out to become a bed (which is BIGGER THAN A KING SIZE!) 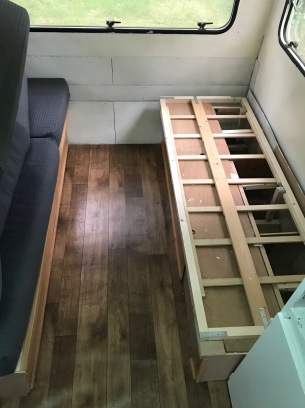 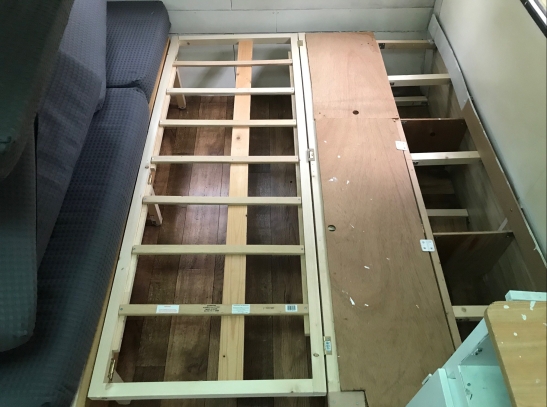 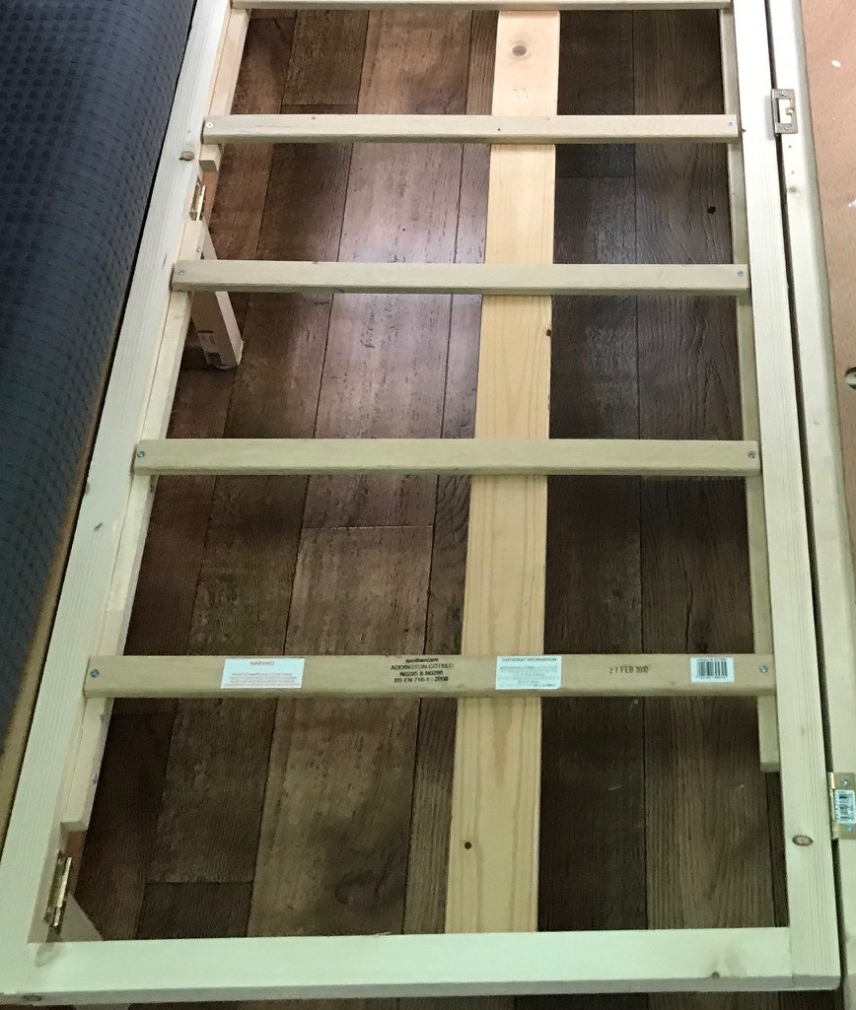 By now I have got pretty handy with my sewing machine, so I decided to make the curtains myself using the fabric we had left over from when I made the cushions.

For the larger windows, I made two curtains so that each half could be opened and closed independently, however for the smaller ones I just made a single curtain which would draw or open from one side.

To make the curtains I cut a piece of the Ikea upholstery fabric making sure to keep the overlocked edge intact so that I didn’t need to hem them. I then pinned along the top edge and sides to sew a hem (about 0.5-1 inch wide) to ensure they looked neat and so that the fabric didn’t fray. 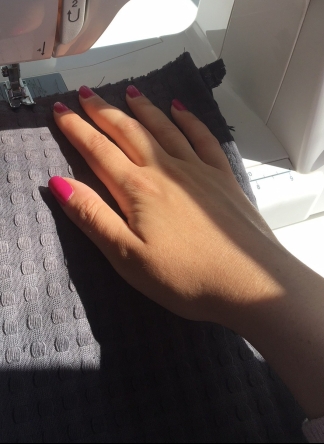 Once they were effectively a nice neat square shape, I took pieces of rope to create the curtain loops which would have the curtain pole pass through them. I cut the rope pieces to roughly 4-inch lengths, wrapped the ends in sticky tape to stop them from unravelling, and sewed them in equal increments along the top edge of the curtain. (Make sure to sew them on the back, as then the front will be a neat and tidy finish). I then cut out a small square of fabric which I sewed to cover the ends of the loops to make a neater finish and ensure they were nice and strong as they are going to be pulled about once actually in the caravan. 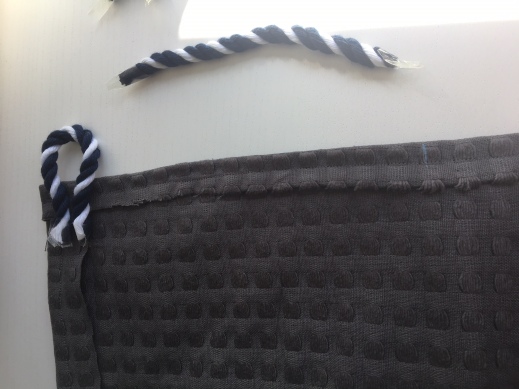 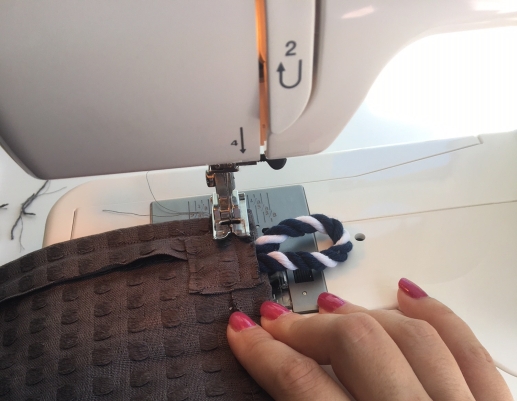 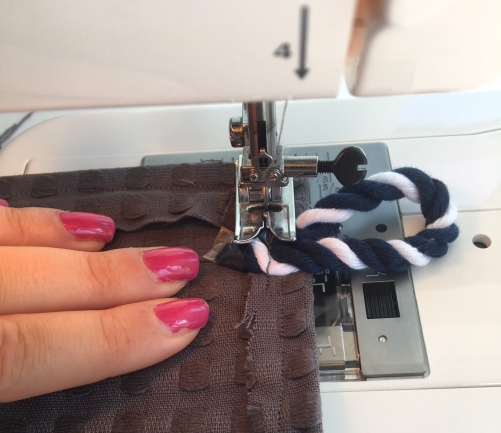 We gave Sully a final clean inside, a jet wash, and a wipe down and finally, he was ready.

He had taken months to finish but now finally we could stand back and see all our hard work in the flesh. What we had achieved on a budget of just under £500 was astonishing. We had given new life to an old caravan and on an absolute shoestring of a budget with very little know-how, which just goes to show anyone with a little can-do attitude can start their own project!

A huge thank you to everyone who helped on the project, we really couldn’t have done it without you!

So watch out, Sully is about and if you see us on the road, honk and say hello!

That Festival Blogger is all about providing advice and inspiration for those looking to take the plunge into the festival world. Have a browse through my own experiences, read my advice, and get tips on getting the most from your festival! 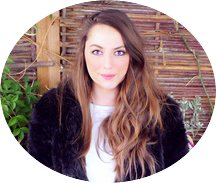 Hi, I’m Sophie!
A festival and travel blogger exploring the world one step at a time. I have been to some of the best and biggest festivals in the world, so I wanted to provide advice and inspiration for those looking to take the plunge into the festival world. 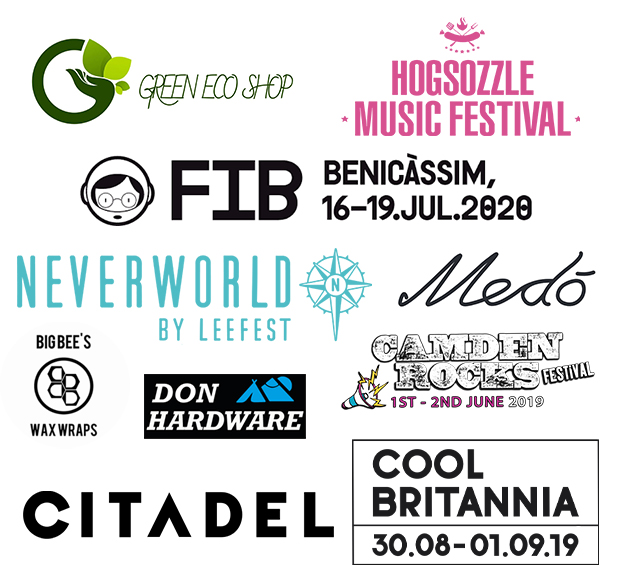